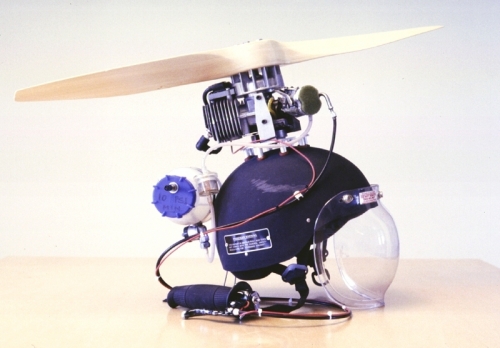 What we need is a big ramp. Then, artist Paul Villinski could climb into his wheelchair glider and find out if it really flies. It certainly looks airworthy. The 19-foot wing is made of birch ribs and rayon skin, just like a real glider. The simple controls work. The wheelchair in the center of everything rolls just fine, so the contraption could get up plenty of speed. Best of all, Villinski is actually a glider pilot. He learned to fly sail planes in 1998. So he'd have a prayer of landing safely.

It may not be surprising that the Maine-born, U.S. Air Force brat, who as a child asked Santa for a plastic helicopter backpack and eventually went on to study art at The Cooper Union college of art, architecture and engineering, would eventually bw1d fantasy flying machines. What is surprising is that they've taken on such resonance in post-Katrina New Orleans.

For years, Villinski, 46, had been assembling junk that he'd found on the streets of New York into sculpture, but he found new, urgent purpose in the New Orleans disaster. During his short stay, he scoured the Lower 9th Ward for inspirational debris.

Back in New York, he transformed flood-stained record albums, downed traffic signs and distressed beer cans into butterfly silhouettes, implying the possible metamorphosis of the city. He planted a small ladder in a pile of sandbags to represent a symbolic refuge. He made an installation of rusted toy trucks pushing a mound of hand-shaped sheetrock cutouts and created a flood line of gilded work gloves.

''Work gloves are proxies for the people who wore them," he said, "that seems especially relevant in New Orleans, given the amount of physical labor that's going on here."

Even his lifelong fascination with aircraft took on a new significance in the Katrina context. When he suspended a tiny handmade chair beneath a butterfly, it became a surrealistic rescue chopper. When he added wings to a discarded Radio Flyer wagon, it became an imaginary escape vehicle. "I asked myself, if I was a 6-year old boy trapped on a rooftop with the water rising, what would I want?"

Even the winged wheelchair, which he'd begun before the storm and flood became a part of his consciousness, took on added meaning. "It's an image having to do with empowerment," he said, "giving the ability to lift off, to triumph, to get above the disaster."