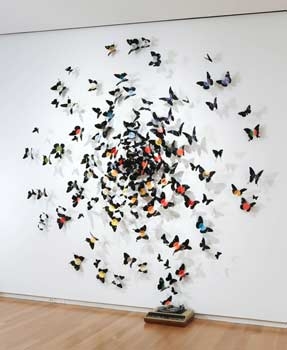 I was so caught up in watching the play of light as it penetrated the piece that I forgot to wonder about art or design; the same thing happened in front of an enchanting piece by Paul Villinski called "My Back Pages." Butterflies had been meticulously cut from vinyl records with a scroll saw, their colorful labels forming the body of the insect; they soared out of a vintage record player sitting on the floor, and fanned across the wall. It is breathtaking, at once whimsical and, oddly, bittersweet. "The soundtrack of my life," as the artist described it, included records by Van Morrison, Herbie Hancock, Fleetwood Mac. He listened to each one last time before engineering its reincarnation; the piece has the resonance of a fairy tale.