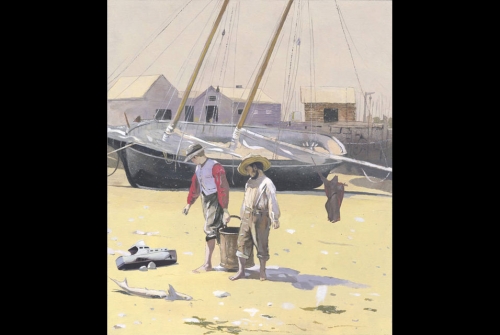 Wrong Sounding Stories consists of twelve meticulously-painted miniature acrylic on panel works ranging in size from 5" x 6" to 10" x 17". Mysock is fast becoming known for his finely detailed paintings that combine various imagery from reinterpretations of masterworks from art history to icons from pop culture and Americana, all collaged into his own masterpiece that creates a new meaning.

Each work in this exhibition is titled with a section of Moses's narrative from the Bible. Using this biblical base, the paintings become tongue-in-cheek re-imaginings of canonized American lore. Abraham Lincoln, "our country's predominant symbol of honesty" is heavily featured in this series as, in the artist's words, "wherever he shows up, there's an assumption of authenticity."

Each of these paintings is rooted in a number of American Masterworks, with references ranging from Whistler's Mother to Evel Knievel's Snake River Canyon jump. Distinctly Americana, these paintings blur the lines between history and storytelling.

Mysock further explains: My main effort here has been to address truth by examining its opposite. I've pushed America's icon of honesty - Abraham Lincoln - to become an inaccurate main character in famous American paintings created by artists working during his lifetime. The certainty of time is altered by the Old Testament Art Historical references residing next to modern symbols. Taken as a whole, varying degrees of disruption to the original works draw attention to a hierarchical range of truth; obvious lies provide cover for more subtle ones.

Ultimately, these paintings are about storytelling, the ownership and authorship of our culture's visual narratives, and the parallels between those tales, but my main role is to challenge the truth of "source" and the source of truth.

Painter Adam Mysock was born in Cincinnati, Ohio in 1983 - the son of an elementary school English teacher and a lab technician who specializes in the manufacturing of pigments. On account of a steady stream of folk tales from his mother, his father's vividly dyed work clothes, and a solid Midwestern work ethic, he developed an interest in painting and drawing all things Americana from a very early age. Mysock earned a Bachelor of Fine Arts degree in Painting and Art History by 2004 from Tulane University. He then received an MFA from Southern Illinois University at Carbondale.

After his studies, he became the mural coordinator for the City of Cincinnati's MuralWorks mural program and worked as an adjunct drawing professor at Sinclair Community College in Dayton. In the summer of 2008, Mysock became a Professor of Practice at Tulane University where he currently teaches and maintains a studio. Mysock's work has been exhibited in Ohio, Kentucky, Illinois, Georgia, Mississippi and Louisiana and is in private collections across the US. He was a 2009 jury winner in the annual No Dead Artists juried exhibition.